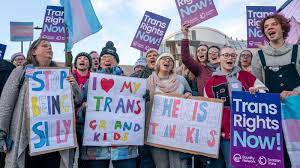 The government of the United Kingdom has blocked a bill passed in its constituent country Scotland that would have allowed transgender individuals to change their legal gender without a medical diagnosis. Scottish First Minister Nicola Sturgeon vowed to defend the legislation and called Westminster’s block a “full-frontal attack on our democratically elected Scottish Parliament and its ability to make its own decisions on devolved matters.” Scotland has benefited from a level of self-governance since its devolved government was established in 1999. The Scottish government accused the United Kingdom’s Scottish Secretary Allister Jack of blocking the bill for political, rather than constitutional reasons, and has vowed to fight the impasse in court.