Out Leadership launches in South America in São Paulo

Out Leadership launched in South America yesterday with two events: a panel discussion for senior business leaders, and an OutNEXT Regional Salon, both hosted by Bloomberg L.P. in Sao Paulo, Brazil.

“We are thrilled to launch on our fourth continent,” said Todd Sears (Founder and Principal of Out Leadership). “Brazil is at a critical point in terms of LGBT acceptance. It’s the largest economy in Latin America, and the world will soon turn its eyes to the Rio de Janeiro Olympics; it is the right time to have a conversation about how Brazil can continue to deliver on its promise to LGBT citizens, and how businesses in Brazil can create Return on Equality.”

“Yesterday’s OutNEXT Salon was particularly exciting for me because it was an opportunity to engage with the next generation of LGBT business leadership in Brazil,” Sears continued. “From London, to Hong Kong, to Sao Paulo, these young leaders never fail to impress with their insight, passion, and courage.” 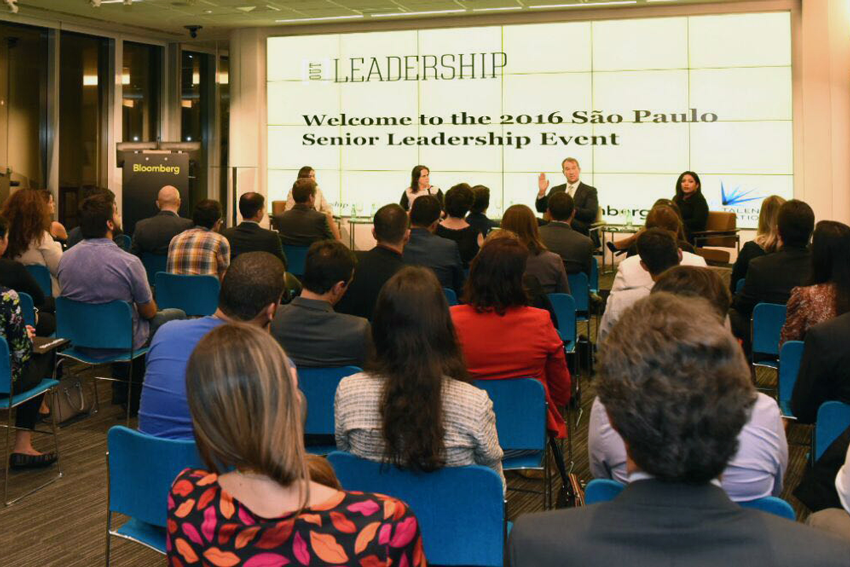 A capacity crowd took in the panel

The Senior Leader discussion kicked off with welcome remarks from Geraldo Coelho (Head of Sales, South America, Bloomberg): “I’m so excited to see such a full room for such an important cause – LGBT market leadership and talent development. LGBT equality not only the right thing to do, but it is also a business issue. We need to pull from the broadest pool of talent available, and so we are proud to partner with OL to promote LGBT equality.”

Senior business leaders from around the country were invited to attend the event, which highlighted a recent report from the Center for Talent Innovation, “Out in the World,” that proposes a framework for how multinational companies can embrace their LGBT workforces in markets that are unfriendly, and even hostile, towards the LGBT community. Out Leadership also launched its CEO Business Brief for Brazil, a tool that Out Leadership member companies can use to deploy “soft power” in support of LGBT employees and customers.

“The idea is simple: we want to empower and inform senior leaders so they can speak about how issues around LGBT equality and inclusion negatively impact their business,” said Sears. “It’s far from protest, and it’s not even really advocacy – it’s using soft power to improve the business climate.”

“The way that we’ve worked around the world is through local engagement. I would ask you, if this is important to you and your company, help us think through how we could engage more in Brazil, and how we can drive things forward here. Policy doesn’t equal culture, as we well know. The laws in Brazil are pretty good, but there are still many people who are negatively impacted by cultural attitudes, so there’s work to be done.”

Ripa Rashid (Executive Vice President, Center for Talent Innovation) then shared a deeper dive into CTI’s “Out in the World” report, which was co-authored by Sylvia Ann Hewlett and Out Leadership Global Advisory Board member Kenji Yoshino, and which includes research among Brazilian LGBT professionals.

Last night’s event marked the first time that the CTI data was presented in one of the countries included in the research, aside from the United States, and Rashid took the opportunity to explore some of the ways that the Brazilian market stands out.   “In Brazil, 61% of employees aren’t out in their professional lives,” she noted. “This is below the international average, but it is higher than other countries surveyed with relatively friendly legal environments for LGBT people, so companies and individuals are still seeking ways to bridge the gap.”

Cris Sampaulo speaks on the panel

Adriana Arai (Managing Editor, Bloomberg News), the evening’s moderator, then introduced the panel, which included Rashid, Sears, and Goldman Sachs Vice President Cris Sampaulo.   Sampaulo narrated an illustrative summary of her experiences within Goldman, where she started in 2001 as a receptionist:

“Everyone has a personal agenda when it comes to their sexual orientation. It was important for me to be out to my friends, and second to my family, but the workplace was at the bottom of the list. I didn’t know how people would react about it, and if there was to be any kind of judgment about who I was, I preferred to just keep quiet and continue to do my work. Of course throughout my journey at Goldman, I noticed the company was very supportive about it, and I was always wondering about why this would matter at the workplace.”

“In 2010, when I joined Human Capital Management,” Sampaulo continued. “I started to appreciate the importance being myself entirely at work. Today, I understand that if you have people who are brave enough to talk about their personal experiences, to be able to be who they are inside of the workplace, then they are creating a more inclusive environment for everybody else. In the past, when the conversation turned to what everyone did over the weekend, it was time for me to grab a coffee. Today, I am able to talk to my colleagues about my personal life.”

“I think the fact that companies Bloomberg and Goldman and other international banks and companies that are represented here are participating in these types of events,” Sampaulo concluded, “And organizations like Out Leadership and CTI doing these types of studies, are very helpful for the people that are starting in the workforce today.”