It is often said that ’life imitates art and art imitates life.’ If that were true, 5.6% of all advertisements in the US alone would feature an LGBTQ+ character, and not just during the month of June.

Today, Lego can release a rainbow lego set predicated on the idea that “Everyone is Awesome.” Global brands like Coca-cola, Verizon, and Gillett have little to no hesitation overtly advertising to and on behalf of their LGBTQ+ audiences. In fact, it is more of a risk not to feature inclusive advertisements considering the $3.7 trillion purchasing power of the LGBTQ+ community and their higher than average brand loyalty. According to our Global Workplace LGBTQ+ Attitudes Survey, eighty-one percent of LGBTQ-identifying individuals and allies are more likely to purchase a good or product from a company that supports LGBTQ+ equality.

The history of LGBTQ+ representation in advertising is relatively short. However, given the history of coded language and subtle messaging among the LGBTQ+ community, it is no surprise that many brands were able to work around the homophobic policies and sentiment of the 70s and beyond.

50 years ago, LGBTQ+ advertising was reserved for alcohol and tobacco brands like Absolut Vodka, which was the first brand to take out a full-page ad in a gay magazine in 1981. Featuring its product in the LA Advocate and After Dark wasn’t a risk to most alcohol and tobacco companies as the religious right made up so little of their customer base. Progress was limited to the underground as mainstream media outlets prohibited LGBTQ+ representation.

The AIDS epidemic in the 1980s caused further setbacks to LGBTQ+ representation in advertising. Advertisers who had reached out to gay media scenes quickly withdrew for fear of stigma. Again, Absolut Vodka broke the mold, publishing an ad featuring gay artist and activist Keith Haring in 1986, scoring big with the LGBTQ community. 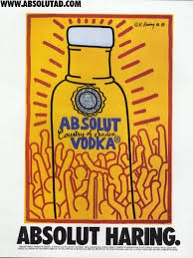 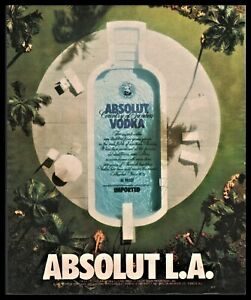 Throughout the 1980s & 1990s, a movement of “gay window shopping” or “gay vague” advertisements emerged. Advertisers included subversive messages targeting the queer community under the radar of mainstream homophobic attention. Benetton was an exception. The brand shocked the world by producing a series of overtly LGBTQ+ characters in their United Colors of Benetton campaign in 1991. One such ad featured a biracial lesbian couple and their adopted child. Benetton paid for the campaign with death threats and boycotts. 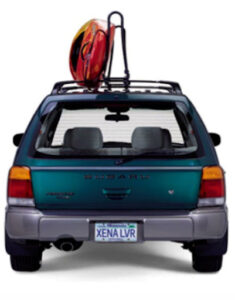 The backlash received by Benetton, meant “gay vague” continued to dominate the majority of queer representation in advertising throughout the 1990s. Subaru was notable for their subtle targetting of the lesbian community, which had been a large supporter of the brand for decades. Taglines running in print ads like “We’re completely comfortable with our orientation,” “It’s not a choice, it’s just how we’re built,” and even “Get out and stay out” dog whistled the LGBTQ+ community without drawing much attention from mainstream audiences. Subaru went so far as to include subversive messages on their photographed license plates. An ad featuring a Subaru sporting twin bicycles on the hood and a plate that read “P-Townie,” for the historically gay vacation spot Provincetown, could be found in mainstream magazines like Movieline and Vanity Fair and local newspapers. Focus group testing and surveys learned that queer audiences actually enjoyed decoding Subaru’s messaging. The hunt for queer content in and of itself became an advertising ploy.

IKEA made waves and history with its 1996 commercial featuring an openly gay couple shopping for furniture.

The ad aired during daytime TV and is acknowledged as having contributed to significant progress towards LGBTQ+ acceptance and equality for its depiction of a gay couple taking part in something as mundane and every day as shopping for a dining table. While IKEA received much praise for its inclusivity, religious groups quickly responded with wide-scale boycotts. One store in Hicksville, New York was evacuated after a bomb threat resulting from the commercial backlash.

The turn of the century brought more progress, but brands continued to play it safe, fearing stigmatization and the risk of being labeled a “gay product.” Brands focused on packageable tropes, featuring upper-class white gay male couples. Transphobia remained common and the inclusion of intersectional identities and non-binary individuals didn’t come about until the 2010s.

The 2015 Supreme Court ruling on marriage equality proved significant for LGBTQ+ representation in media, ushering in an era of boundary-breaking in the advertising industry. As audiences began demanding greater representation of diversity from big box brands, advertisers responded with more intersectional approaches to gender identity and sexuality.

In 2018 Gillette (owned by P&G) released an ad featuring a father teaching his transgender son to shave.

Coca-Cola presented its gender-neutral range of coke bottles during the 2018 Super Bowl.

And Verizon’s Love Calls Back ad (coincidentally made by Out Leadership member firm McCann) features the reunion phone calls of queer individuals and their families.

Brands have become so inclusive in fact, they are now being accused of “rainbow washing” or projecting the image of inclusivity through LGBTQ+ representation without following up with any action. Despite setbacks, the industry has continued to respond to audience demand for more representation.

So what can the advertising industry learn from this short history?

Researchers have synthesized the essence of successful ad campaigns over the last couple of years into three main calls to action:

Social Proficiency – Researchers define social proficiency as the organization’s awareness and deep understanding of their audiences’ wants, desires, preferences, challenges and beliefs. An organization needs to provide a prologue as to why they want to cater to an LGBTQ+ audience and how it benefits them.

Consonance – The message must align with the behavior. Consonance is defined by the organization’s holistic view of diversity, equity, and inclusion. It is not enough for an organization to rainbow wash their products, they must also develop a keen sense of self-awareness and follow up on actions that are meaningful to the community. This action must be consistent all year round, not limited to June. Transparency is vital to inclusion efforts, even if the company is not where it would like to be.

Inclusivity – Organizations wishing to advertise to a specific community must take an intersectional approach and recognize the difference between inclusion and separation. Advertisers should avoid stereotyping or relying on stereotypical tropes and instead look to the shared human interests that connect communities rather than divide them. This can be accomplished most effectively by keeping a diverse team and ensuring all voices are heard during the decision-making process.