On Friday I had the opportunity to provide testimony, on behalf of Out Leadership, in front of the California Legislature’s Select Committee on Corporate Board and California Workforce Diversity in a session titled “The Future of Diversity in California Business” (see Press Release).

Today’s hearing was hosted by Assembly Members Holden and Garcia who also co-sponsored the groundbreaking board diversity legislation (AB979). Although Out Leadership is closely involved in the implementation of AB979 through its initiative OutQUORUM, my remarks today were focused on the equitable distribution of public contracts.

California, the world’s 7th largest economy, is home to nearly 1.7 million LGBTQ+ adults (approximately 92,000 identify as trans), 4.25% of the State’s population, and about 15% of all LGBTQ+ adults in the US. Yet, LGBTQ+ people do not experience prosperity at the same pace as their heterosexual and cisgender peers.

In fact, California has perhaps the best data worldwide on what is one of the least studied populations. The reason is that it hosts the Williams Institute at UCLA, a unique center in the world. The Institute is dedicated to conducting rigorous, independent research on sexual orientation and gender identity law and public policy.

Through multiple studies over the years, the Institute has dispelled the myth of gay affluence, defined as the “persistent societal belief that gay men, on average, are wealthier and better educated than their straight peers”. In California, the Institute’s studies showed that LGBTQ+ people, particularly in the farm regions, have a higher incidence of poverty, higher rates of food insecurity, lower education, and health outcomes, and access to housing and public services. They also uncovered the issue of intersectionality. Negative outcomes are compounded by veteran status, race, gender, socio-economic class, or being formerly incarcerated. This is particularly important in this State as 34% of the LGBTQ+ population is Latino. 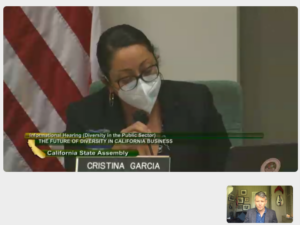 In this context, the structural changes Californian lawmakers are making, such as guaranteeing that LGBTQ+-owned businesses have access to public contracting are crucial. It paves the way for LGBTQ+ people to have access to economic opportunities and a life of dignity.

For years state lawmakers have adopted legislation requiring various state agencies to contract with LGBTQ+-owned businesses, certified by our friends at the National LGBT Chamber of Commerce (NGLCC) and convened by organizations such as the Golden Gate Business Association (GGBA), similar to programs aimed at benefiting businesses owned by racial minorities, women or disabled individuals. Programs that give preferences in public procurement to businesses based on these characteristics are highly effective in pulling up minorities.

The engagement of the State to address these inequalities goes back to 1976 when Los Angeles becomes the first city in California to offer municipal employment protections against discrimination based on sexual orientation. A policy, at the time, that was limited to public employees.

In 1979, Los Angeles led the way by giving access for LGBTQ+-owned businesses to public contracts. In doing so, Los Angeles became the largest city in the US to formally include LGBTQ-owned businesses in contract processes worth billions (see this CNBC article). LGBTQ+ owned businesses are defined as being in majority (at least 51%) owned, operated, managed, and controlled by an LGBTQ+ person or persons who are either U.S. citizens or lawful permanent residents

In 2019, Caltrans became the first State Department of Transportation to include LGBTQ+ businesses in its official procurement programs (See GGBA press release).

Angela Shell, the state’s chief procurement officer at the California Department of General Services, reiterated during the hearing the efforts of the State to reach out to LGBTQ+-owned businesses.

For LGBTQ+ Californians, these efforts are necessary to ensure fair access to economic opportunity. The effects benefit the LGBTQ+ community as a whole. Successful LGBTQ+ companies strengthen the entire LGBTQ+ community and offer real opportunities for economic inclusion. Moreover, LGBTQ+ inclusive supplier diversity means that there will be greater LGBTQ+ visibility across California. Economic visibility, just like social or media visibility, has a tremendous impact on societal attitudes and therefore acceptance of LGBTQ+ people.

California continues to lead the way thanks to elected officials in local, state, and federal government agencies such as Assembly Members Holden and Garcia. In the annual Out Leadership LGBTQ+ State Business Climate Index, California remains in the top 10 for LGBTQ+ inclusion in our 2021 ranking. Yet, the bar for equality always gets higher and we look forward to continuing to the State to respond to the resolve of the people of California to build a more just and inclusive society.

Recent legislation, such as AB979 signed into law by the governor a year ago or efforts to provide access to state procurement will strengthen the foundation of an inclusive community rooted in economic, social, and legal equality.

OUT NEWS
October 13, 2021
An Interview with Anjali Rimi

Everything you need to know on the global #LGBTQ movement this week. Mourning ⁦@MonicaLBoll⁩, the ⁦@peterstaley⁩ memoir, what’s going on in #China, the ⁦@ADB_HQ⁩ safeguards, ⁦@japan⁩’s backward trans policy. ⁦@OutLeadership⁩ https://t.co/T5PyfYpcjY

#OutLEADER Beth Ford, CEO of Land O' Lakes and a newly elected member of the @BlackRock (a new #OutLeadership Member Firm) board shares her thoughts for the future with @BusinessInsider. Read now: https://t.co/DzWb68BTUC

"In Asia, #LGBTQ+ people are experiencing development in reverse gear". I provided a testimony this morning at the @ADB_HQ's safeguards consultation to reiterate private sector's stake in ensuring that Asian economies become inclusive of this marginalized community @OutLeadership

In his time as US Ambassador to Denmark, @rufusgifford saw firsthand the impact he had on the country's #LGBTQ+ population by being out and visible.

Reminded this #NationalComingOutDay how lucky we were to host @OutLeadership's @toddsears and former US ambassador to Denmark @rufusgifford.

Both have used their impressive careers to advocate for #LGBTQ+ members across the world.

"My years on Wall Street taught me that businesses have a huge role to play in driving LGBTQ+ equality, and that's why I founded Out Leadership. And for the past 10 years, we've been changing the world." Founder, @toddsears on National Coming Out Day.

Earlier this year we joined @OutLeadership as part of our efforts to build a more inclusive workspace. With Todd and team, we are working to help employees feel empowered to come to work as their true selves today, #NationalComingOutDay, and every day https://t.co/kRHOp2B9dX

Join us TODAY, October 8 at 12pm ET for an OutSPOKEN event with @themilajam.

Mila will be speaking with special guest @DaniielleAlexis about trans rights and the role local politicians play in protecting them.

Join us TOMORROW, October 8 at 12pm ET for an OutSPOKEN event with @themilajam.

Mila will be speaking with special guest @DaniielleAlexis about trans rights and the role local politicians play in protecting them.


Error: There is no connected account for the user false Feed will not update.

Error: admin-ajax.php test was not successful. Some features may not be available.

Please visit this page to troubleshoot.